Here you will be having the latest job offer from Population Welfare Department KPK Jobs 2023 Latest Vacancies in Buner. Applications are being invited from the govt sector named Population Welfare department of KPK is looking and inviting well-disciplined, caliber, and capable applicants are required for the following government jobs given below.

Applicants are needed to fill out the wonderful job vacancies of the following Population Welfare Department Jobs which include (Family Welfare Assistant (Female) (BPS-07)) which are the current openings that need to be filled immediately at Buner District. The appointment will be done on a contract basis and will remain continue till the demand of the population welfare department. Attractive pay packages will be given to applicants which can be seen in ads. Now, I will throw light on its further below towards more details.

Today on of the wonderful department which is having the affiliation and is regulated by the Government of KPK named Population Welfare Department of KPK which is involved to aware the masses about the family planning and family build up growth and how one can be a organized family. In every Province this department is found and it takes great care of the peoples in such cases. Being a Govt organization it always offers number of the posts of all levels from Masters to Matric level and those of Primary and Middle qualification holders are also eligible to apply.

For all of the above vacancies, the overall qualification which is required includes Matric with relevant expertise are required to apply for such posts.

How to Apply for Population Welfare Department KPK Jobs:

Application Form Will Be Available Soon 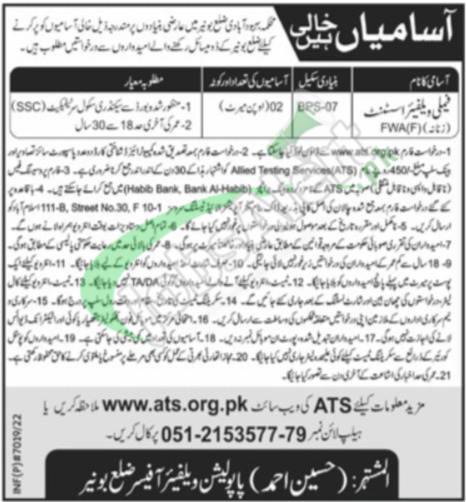